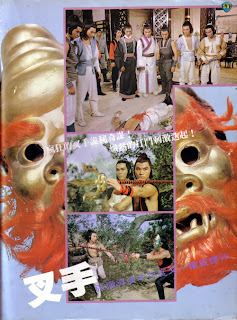 Hello folks, we're going to cover one of the all-time great martial arts movie classic here on Hai! Karate and that is none other than Masked Avengers!!! This flick is another one of the films that stars the actors that make up the famous Venoms crew, but in a decidedly different way. And it's also another project from the legendary Cheng Cheh as director.

The movie begins with something unusual for the Shaw films up to this point; simple titles that focus on the scary bearded masks and tridents of the Masked Avengers gang. It gives the film it's dark, edgy feel right away. The story begins with the Masked Avengers tracking down another of their victims they've been hired to kill.(No mention is made of who hires them ultimately throughout the picture.)One of the victims gets away and finds Qi Shanyung(Chiang Sheng)and other heroes to tell them what happened. Shanyung along with Zeng Jun(Chin Siu-Ho) and Liang Rong(Chu Ko) have gathered the heroes from different clans together to stop the Masked Avengers gang and their devilish deeds. And 'devilish' is the right word to use; the gang is a bunch of sadistic, crazed mercenaries who drink blood and take joy out of killing. Case in point? The first scene in their hideout shows them drinking the blood of a chicken. Disliking this, the chiefs then unveil a discarded Buddha Statue and throw a trident at the exposed midsection. Then they push a button and reveal that it's another victim STILL ALIVE in the statue. Gory stuff.

Qi Shanyung and crew find themselves in a town near where the Masked Avengers are suspected of hiding. They begin to investigate two powerful lords who are rivals in the town, Lin Yunzi(Lu Feng) and Fang Zanguang(Wong Lik). They make their base in a local inn and find a suspicious figure in the cook Gao Yao (Philip Kwok)who Zeng Jun winds up befriending with some resistance by Yao. This sets the scene for some serious intrigue and inevitable action up ahead with a couple of twists you don't really expect. And the final fight scene brings it all to a head in the abandoned temple hideout of the Masked Avengers!!

Masked Avengersis one of the most acclaimed kung fu films...but it didn't make a ton of money when it first came out. In fact it was considered a box office failure and could have been one of the films that made Sir Run Run Shaw think long and hard about his film empire's dwindling future. Audiences may also have had mixed feelings because while this is a film associated with the crew of actors who played the Venoms, not all of them are here in this flick. Lo Meng had left by this time, and Sun Chien for some reason wasn't available. Chin Sui-Ho fills in admirably as Zeng Jun. This was one of Chin's few roles as a leading actor for Shaw. He displays enough heroic charisma and a bit of comedic charm. It fits here as he tries to make friends with Gao Yao and solve the case. He'd go on to have a couple of more lead roles and star in a couple of notable Jet Li flicks, most famously as his friend turned rival in The Tai Chi Master in 1993. Chiang Sheng takes on a more serious role as Qi here in a departure from his comically-tinged prior roles. The standouts though are Lu Feng and Philip Kwok. Feng hit his stride as a master villain here. His first appearance in the flick though is a bit hilarious, manicure and all. It doesn't betray just how foul of a villain he proves to be in the flick. Philip Kwok as Gao Yao is masterful as the brooding chef with a secret. His acrobatic maneuvers here are among some of his best work.

You'll note that Masked Avengers has a scant female presence in the film save for a couple of attendants to Ling Zunyi, a woman who is abducted and raped mercilessly by the gang and the 'meditating wenches' seen in the inner temple sanctum - butt naked. Again, Cheh stuck with his own code of feeling that women were merely plot devices here. Another point is just how DARK this film can get. Drinking blood and rape, along with religious symbols being used as torture devices are pretty ill factors for a film. It gets even more twisted once you get to the final fight scene. In some ways that scene is worth some of the drawn-out intrigue earlier in the picture just because of the heroes' fight to get there, only to be met with each of the chiefs entering the fray by being lowered from the roof into the inner chamber, spy movie style. Slightly cheesy? Perhaps but you'll get a kick out of it. Especially when the acid plays a part. You won't even mind how Zunyi gets his, even if it seems a bit unreal. But that is the beauty of Masked Avengers; it employed a ton of great action thanks to Kwok, Sheng and Ko's fight direction along with great set design and a plot that moves quickly in a deceptive way. The entire film takes on a radio serial feel of suspense, and even tips its hat to comic books. A side note: the soundtrack is in part taken from the sci-fi dystopia hit Mad Maxreleased two years earlier. There is a distinct level of bloodiness here, which was increasingly due to both Cheh's own machinations and an appeal to get more audiences used to seeing it in other pictures of the time. The gang drinking blood repeatedly, a member visibly biting off his own tongue to avoid talking among other scenes make this one of the more rougher Shaw pics. But it is all worth it. Make Masked Avengers one of your must sees if you haven't already.