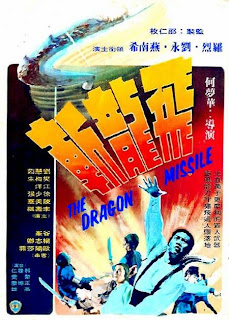 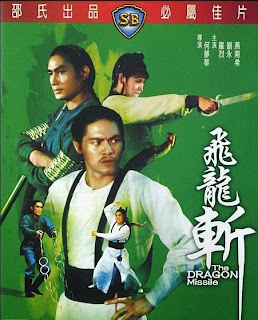 What goes on folks?! Hai! Karate returns with another flick up for review for all of you who love martial arts movies! For this go-round, we cover a flick from the Shaw Brothers Studios featuring the legendary Lo Lieh, The Dragon Missile!! The film also stars Tony Lau Wing, Nancy Yeh Nan-Si, Ku Feng, and Terry Lau amidst a full cast. Ho Meng-Hua sits in the director's chair for this one. This flick has been getting some notice of late, and it should - for reasons both good and not so good.

The Dragon Missile begins with Si Ma Jun(Lieh) demonstrating the fearsome capabilities of the Dragon Missile. It's basically a flying guillotine but in dual form that has a boomerang effect that sends it on its killing ways, then brings it back to the thrower. We get past the credit scene and find ourselves in a stately mansion where the lord(Feng) is dying from some sort of illness. Before we get sympathetic though, the lord orders three aides to be beheaded just for suggesting he make arrangements after his passing. The lord gets Dr. Fu(Hao Li-Jen) to inform him that in order to live, he needs to get the Longevity Rattan, have it be burned to ashes and then made into a powder. Only then can he live. But Dr.Fu doesn't grovel enough to the lord's liking, so he has Si Ma Jun kill him right outside. Then he sends him out to get the rattan.

Now if you've kept up so far, you would think that Si Ma Jun could be trusted by this lord. NOPE. He orders Chief Yang(Man Man)to send six other assassins out with Si Ma Jun to keep an eye on him. Yang in turn tells them that if they get the rattan from Sima Jun and give it to him, he will reward them greatly. All of them relish this, none more than Miss Sha(Lau) who apparently was related to Wolverine from the X-Men in some form given her unique skill.

They all set out for the only place to get the rattan, from the herbalist Tan. Tan however refuses to give it to them being that the lord is unjust. Si Ma Jun and the others kill him and his aide and take the rattan. Tan's daughter Tan Li(Nan-See)arrives too late and vows revenge. The group stop on the road where Si Ma Jun beats up Miu Fei(Fan Mei-Sheng). He gets the rattan stolen from him by a tree-hopping bandit. This turns out to be his classmate, Tieh Er Long(Lau Wing). Si Ma Jun heads to Er Long's house, and they shoot the breeze along with Er Long's mom. Si MaJun comes back secretly to get the rattan and winds up fighting his mom who's not bad with her skills. But she winds up a victim, and Er Long and Tan Li wind up teaming up for revenge. (Side note: He did her DIRTY.)

Si MaJun is beset on all sides, and winds up having to fight off not only Er Long and Tan Li, but the other killers. This becomes a big storm of intrigue until Si Ma Jun gets the rattan to his lord, only to find that due to a mishap where the rattan got wet, it becomes useless. The lord, infuriated, orders Si Ma Jun beheaded. And the loyal killer now becomes a fugitive, on the run until the ultimate showdown. Can the Dragon Missile remain invincible?

The Dragon Missile is B-movie status when you really get down to it for good and bad reasons like I said before. The plot is as chopped up as an egg salad with no real taste to it. Ho Meng Hua keeps things moving at a detriment to the film. Exhibit A? The fact that throughout the entire movie, the only characters who get any sense of character outside of being one-dimensional are Si Ma Jun, Er Long and Tan Li. In that order. THAT'S IT. No other info on the killers. Mind you, we don't even KNOW the lord's NAME. For the whole flick! The film is a rush job. This is due to the fact that Shaw Studios was at this time dealing with the fact that they were no longer top dog in the cinema world. They were trying to keep up with Golden Harvest and another studio from Taiwan, First Films, who happened to be making a picture that ripped off their hit from 1974 that Meng-Hua directed, The Flying Guillotine. That movie would star & be directed by the rapscallion actor Jimmy Wang Yu, known as Master of The Flying Guillotine, and become a cult classic. In fact, THAT film ran the same week as The Dragon Missile, forcing the Shaw entry to only run one week and leave the theater in defeat. Wang Yu had a habit of copying his competitors' flicks with his own movies and this time it paid off big. It stung more because you can see that Shaw put some money into their film despite it being lackluster overall. 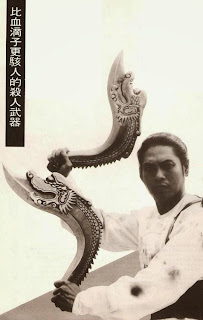 For instance, the weapon itself is exemplary in its creation. It's the centerpiece of the film, and would be an inspiration for future films to employ such wicked weaponry. It even had its own slick leather holster. That said, it might be your only reason to catch this movie. I mean, Lo Lieh was okay as Si Ma Jun. He manages to let him be more than a loyal killer with his acting especially in the last 20 minutes being on the run. Tony Lau-Wing was coming into his own as an actor with Shaw Studios. This was his third picture with them, building off of his stellar turn in The Big Boss. (Side note: he was working on two other pictures in addition to this at the same time.)He'd go on to be an iconic figure for them in their later years. Nancy Yen Nan-See? There's only one word for her: MEH. She had some chops, but no real appeal. Straight wooden. Even Terry Lau as Miss Sha looked like she was just going through the motions. The fighting is decent but barely so. You may get a bit dizzy with the plot if you step away, be warned. There's no real bloodshed, unlike the movie that inspired it. And the jumping plot is going to make you scratch your head. There's one or two moments where you will get the feeling like, 'let's just get this paycheck and go party, bump all this.' Ultimately, The Dragon Missile is something to see for the actual weapon itself and mot much else. It's now available on DVD and if you've got the El Rey Network.