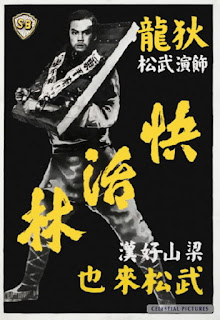 Get ready for some raw action with "The Delightful Forest"!!! This joint stars screen legend Ti Lung and is adapted from the classic Ming Dynasty novel, Tales Of The Water Margin. It's also directed by Chang Cheh, so you KNOW it's going to be wild for the night. The film begins with Instructor Wu Song(Lung) on a mission to avenge his brother's death at the hands of his sister-in-law & her lover, Ximen Qong. They mention briefly that he was attacked and in the process, killed a tiger bare-handed. Yes, you read that right. He finds Ximen Qong in a tavern and after a rough fight, kills him. The constables come and he confesses. After sentencing, Wu Song is escorted to prison while locked up in a giant placard. He & his guards stop in at an inn, drink and eat without realizing they've been drugged by the waitress. He winds up being attacked by the waitress, who is joined by her husband. They then reveal that they were admirers of Wu Song and befriend him. Wu Song is just charismatic like that. So much so that he even befriends the son of the warden at his prison and agrees to take out a corrupt official, which leads to a whole lot of bloodshed. 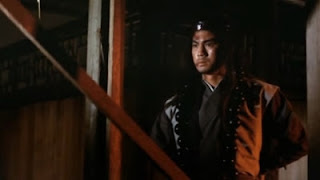 "The Delightful Forest' is a GREAT film. It is actually part of a series of films in the Shaw library dedicated to tales from The Water Margin. Lung would later reprise this role in 'The Water Margin', 'All Men Are Brothers', and 'Tiger Killer'. Be warned; if you're squeamish, the last fight scene is gory with a capital G. It's kind of a light precursor to that last scene of Takashi Miike's 'Ichi the Killer'. Here's a bit of trivia - the music in this film is actually Ennio Morricone sound cues from 'Once Upon A Time In The West'. Ti Lung plays Wu Song well, in all of his drunken & brash glory. Any time a film has a Youtube video dedicated to its kill count, you know you're in for wild times. 'The Delightful Forest' is delightfully full of rip-roaring action for your lazy afternoon movie viewing!